ALL YOU NEED TO KNOW ABOUT FIR 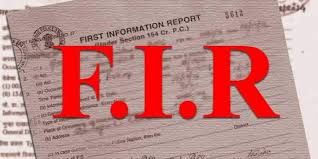 FIR is First Information Report which is filed before Police with respect to an offence committed and it then sets the criminal law into motion. It is only after the registration of an FIR that Police investigates into an offence.

An FIR is registered under section 156 CrPC which provides that FIR can only be registered for cognizable offences. Cognizable Offences are those for which Police can arrest anyone without any warrant i.e. in the cases of serious offences such as Murder, bride burning, dowry, cruelty to wife, rape, theft, extortion, dacoity, kidnapping etc. In case an offence falls in the category of non-cognizable offences, then on receiving such an information Police officer shall send the information to Local Magistrate for further action.

Section 156 CrPC further provides that on receiving an information about commission of cognizable offence, it shall be the duty of the Police Officer to write it down (also known as registration of FIR) and such writing shall be signed by the complainant i.e. person who is giving such information. Copy of FIR will be provided to complainant Free of Cost.

FIR can be registered by any mode i.e. by personally going to Police Station or by giving the information through telephone or by sending an email. Nowadays, you can also get the FIR registered through online portals i.e. on the website of the concerned Police Department.

In the state of Punjab, Special portal has been made on the website of Punjab Police for registration of FIR involving NRIs:

GUIDELINES OF SUPREME COURT REGARDING MANDATORY REGISTRATION OF FIR

In the year 2014, a landmark judgment was delivered by the Hon’ble Supreme Court of India in the case of Lalita Kumari v. State of U.P (2014) 2 SCC 1 in which it was held that registration of First Information Report is mandatory under Section 154 of the Code of Criminal Procedure, if the information discloses commission of a cognizable offence and no preliminary inquiry is permissible in such a situation. If the information received does not disclose a cognizable offence but indicates the necessity for an inquiry, a preliminary inquiry may be conducted only to ascertain whether cognizable offence is disclosed or not. Also, following guidelines with respect to mandatory registration of FIR were issued:

WHAT TO DO POLICE OFFICIAL HAS REFUSED TO REGISTER AN FIR?