REFUSAL OF PASSPORT UNDER PASSPORT ACT 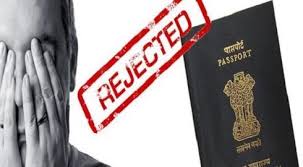 What is a Passport?

Passport is a travel document, usually issued by a country’s government to its citizens. It certifies the identity and nationality of its holder primarily for the purpose of international travel.

In India, the passport is issued by the Ministry of External Affair (MEA) to the citizens of India. It enables the bearer to travel internationally and is also a proof of Citizenship under the Passports Act, 1967.

Kinds of Passports in India

Right to Passport as a Fundamental Right

In the Satwant Singh Sawhney Case (1967), the Hon’ble Supreme Court held that the right to travel abroad is a fundamental right under Article 21 of the Indian Constitution which is covered under personal liberty. The Court recognized that a citizen cannot travel outside the country without a passport.

The right was further elaborated in the Maneka Gandhi v. Union of India Case (1977). The court held that it is the right of a citizen to be heard and know why his/her passport is rejected. The court also said that such an order violates Article 19(1)(a) and Article 19(1)(g) of the Constitution. The Court adopted a liberal interpretation of Article 21 and said the fundamental right guaranteed by the Article is violated if Passport is denied. It extended the concept of ‘personal liberty’ to the entire world.

Section 9 of the Passport Act states that different conditions and forms can be prescribed for different kinds of passports. Additional conditions can be imposed by the Passport Authority on the same with the previous approval of the Central Government.

Appeal against Refusal of Passport

The Appellate Authority under the Passports Act, 1967 is the Central Passport Organization, a subordinate office of the Ministry of External Affairs, headed by Joint Secretary and Chief Passport Officer.

Writ petition against refusal of Passport

The Punjab and Haryana High Court in the case of Manjit Kaur Dhaliwal vs Union Of India & Anr (2019) held that an appeal under Section 11 of the Passport Act, 1967 must be filed before invoking the Jurisdiction of the High Court through a writ petition under Article 226/227 of the Constitution of India.

Delay in grant of Passport by Appellate Authority

It was held by the Punjab and Haryana High Court in the case of Dharam Singh vs Passport Seva Kendra Jalandhar (15 July, 2019) that if the Passport Appellate Authority has approved the grant of the Passport and delay is caused by the Passport Office, the petitioner can approach the Court by filing a writ petition. The Court can direct the Passport Office to take action within a limited time period.